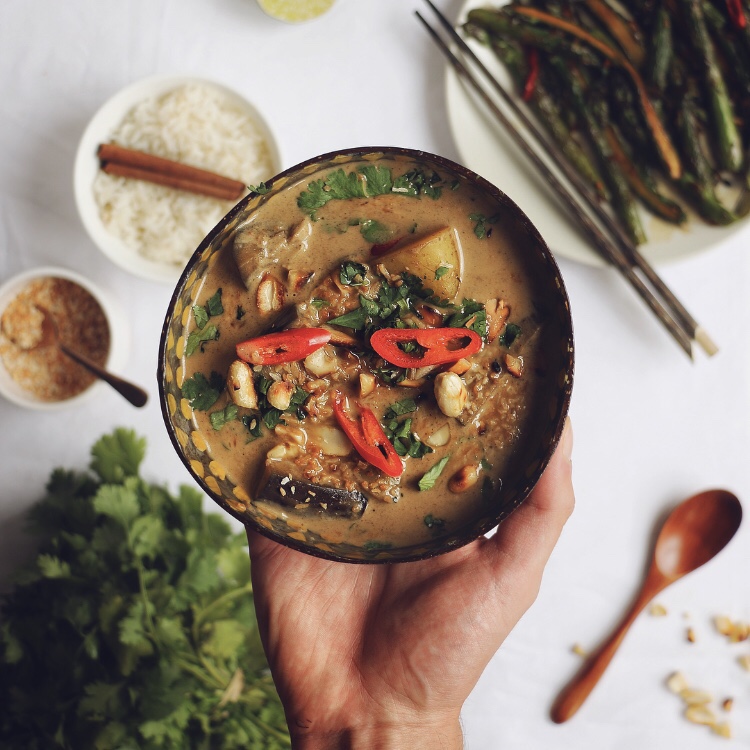 no puns, this is just bloody delicious

straight up this vegan curry inspired by massaman is my new fave thing. the paste has such a warm flavour with complex spices, add to that the comforting richness of coconut milk and a genetic predisposition to liking potatoes and you’ve got really a knockout dish.

i put aubergine in mine, but i get that aubergine in curry isn’t everyone’s cup of tea because it gets a bit eh… wet. but i think some tempeh could be a super delish alternative, and obvs meat (esp lamb or beef) would go well if ya that way inclined.

making your own curry paste sounds like a bit of a ballache (side note: one time my friend texted me that word and i misread it as like a word that rhymes with “panache” and i was like “wtf is ballash??” lol) but this makes enough for like 4-6 servings and you could easily double up and keep it in a jar in the fridge! and it seriously adds so much! you guys know i almost never advocate doing things the long way round but this really makes a difference aha.

2. Add the vegetable oil to a large frying pan over a medium heat. Roughly chop the brown onion and add it to the pan. Chop the aubergine and potatoes into 2cm cubes and add to the pan once the onion has browned. Allow the vegetables to cook for a few minutes before reducing the heat and adding the curry paste.

3. Mix the remaining curry ingredients in a jug until combined, then add to the pan along with the bay leaves. Bring to a boil, then reduce the heat and allow to simmer for 1 hour.